We are now located inside The Majestic Theater!

Have a Paranormal experience? Want to be featured on TV?

Anyone seen Paranormal Witness on the Syfy channel?

It is similar to the old show A Haunting that was featured on Discovery Channel years ago.

Series brings to life the stories of people who have lived through paranormal experiences that defy explanation.

If so, do you have a real experience that want to share with the public? Please message me about your experience in great detail. You and your story could be aired on Paranormal Witness on the Syfy channel! [email protected]

We are hoping to finally open and move into our new office within the next few weeks. We will be running a haunted history tour of a local building. Stay tuned for more details!

We are currently taking applications for Electrical Engineer and/or someone that has experience in building and wiring electrical devices. We are looking to start building our own devices. If this is something that you are interested in, please email us at [email protected] 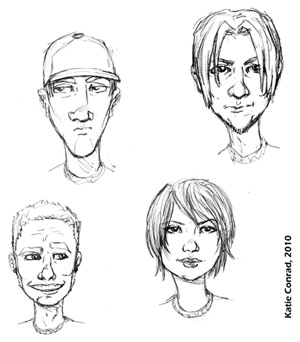 Founded in 1998, The Fallen are an elite team of paranormal investigators dedicated to unlocking the secrets behind the beyond… in Illinois. Each of the five lends a set of special skills or abilities hitherto unimagined by humankind, such as “ESP,” “encyclopedic knowledge,” and “sarcasm.”

Are The Fallen a serious paranormal team or dangerous amateurs?

Not much is known about the origins of the mysterious order called The Fallen. Working in the shadows, the quintet has investigated the often dangerous, misunderstood, and hidden forces of this world while frequently eliciting the ire or grudging admiration of those around them. Officially, the members of The Fallen deny their existence.

What is known about the group is mostly rumor or pieced together from police reports or the testimony of their detractors. Bill Tucker, a member of the Pan-Continental Paranormal Research Society, does not think The Fallen should be taken seriously. “It’s just a group of kids, that’s all,” he said. “I don’t understand why everyone whispers when they talk about them – like they’re afraid to say the group’s name out loud. They’ve never even been on TV – how could they be a legitimate research team?”

Internet chat rooms and message boards tell a different story, however. Ever since 2007, rumors have circulated about The Fallen’s activities in Illinois. Even their detractors have to admit the impact the group has had since they first surfaced in the Midwest. After four years, however, the group has yet to post evidence online, attend a paranormal conference, or even come out with a website, leading many to speculate about their activities.

“I heard they were a secret government organization sent to cover up UFO sightings in Illinois,” Mark, 17, speculated.

“I’m in love with Davin,” one admirer recently confessed on a message board. “He’s so enigmatic.”

Last July, The Fallen were picked up by the local sheriff for trespassing at Aux Sable Cemetery. “We don’t tolerate any kind of shenanigans,” one officer in the department said. “Still, there was something different about this group. I could tell they knew what they were doing and were totally calculating about it. Honestly, we are considering them dangerous and will arrest them on sight if they ever come back here.” The officer agreed to be interviewed for this article on condition of anonymity.

Even more mysterious is where the group gets their funding to travel the haunted places around the state (and even the entire country – eyewitnesses have placed them in Maine, Louisiana, and Virginia). A freedom of Information request to the IRS turned up no tax records for any of the members of The Fallen. Recently, this reporter received an anonymous letter claiming that The Fallen had been paid a substantial amount of money to conduct several investigations in a small Midwestern town. The name of the town was not disclosed, but the letter writer said The Fallen referred to it as “Black Willow Grove.” There is no record of a town named Black Willow Grove in Illinois or in any of the neighboring states.

The Paranormal Review & Gazette will continue to bring you the latest information about this group’s activities. Should you happen upon The Fallen, this reporter recommends you keep your distance and take detailed notes. We have set up a tip tine where you can send information about their whereabouts.

To learn more about the mysterious group known as The Fallen, click here ------> The Fallen 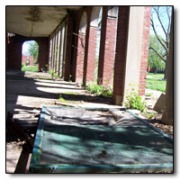 Manteno State Hospital opened its doors in the early 1930s as construction on the sprawling hospital was still ongoing. Like Peoria (Bartonville) State Hospital, Manteno was laid out in a “cottage plan,” which meant that the patients were housed in a series of separate buildings rather than in one single institution. When it first opened, Manteno accommodated 6,620 total residents. Underground service tunnels linked all the buildings. In 1939, in an incident that Time magazine referred to as the “Manteno Madness,” 384 patients and staff came down with typhoid fever and more than 50 ultimately died.

Manteno State Hospital was later renamed the Manteno Mental Health Center and closed in 1985. The north side of campus became a veteran’s home. Other buildings were consolidated into the Illinois Diversatech Campus and rented to businesses. The main administration building became a bank. Despite public health concerns, a housing project called Fairway Oaks Estates was recently built at the location. Since the hospital’s closure, many people have visited its remains and have come away with strange stories. They have seen apparitions of patients and nurses, and have heard voices over the long-defunct intercom. 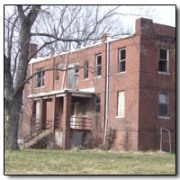 The Jackson County Poor Farm became known as Sunset Haven during the 1940s when it was converted into a nursing home. The nursing home closed in 1957 and Southern Illinois University purchased the property to expand its agricultural program. During the 1970s, the university made an effort to locate all the unmarked graves of the dead that had been buried during Sunset Haven’s years as a poor farm. The graves are supposedly located in a grove of trees behind the building. Sometime later, the name was changed again, this time to the “Vivarium Annex,” where SIU used it for animal research. The building is currently abandoned, although the university occasionally stages emergency drills on the property to test its medical students. The building’s final closure and decay inevitably led to stories of ghosts and other horrors, and the atmosphere inside the structure lent itself to rumors of medical experiments gone awry. 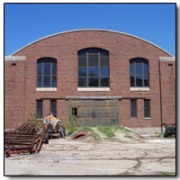 Chanute Air Force Base opened in Rantoul in July 1917 and was a vital part of the local economy for nearly 76 years. After its closure in 1993, much of the base was divided up into residential and commercial properties, but most of the core buildings remain abandoned. Inevitably, local kids exploring the abandoned parts of the base in the past few years have begun to bring home unusual stories. Some visitors have, through the broken windows, reported seeing an officer working at his desk. Others say they have seen phantom airmen strolling the weed-choked sidewalks or sitting in the cockpits of the planes behind the Air Museum. On September 13, 2001, at 10pm, a police K-9 unit responded to a trespassing call at White Hall, one of the largest abandoned buildings on base. Dutch, an experienced canine with 957 drug arrests under his collar, pursued something up to the roof, where he suddenly and unexpectedly leapt 15 feet off the building and fell to his death.

Most recently home to a decorative glass company, from 1904 to 1984 this building served as Milton Elementary School. Locals whisper that during the 1930s, a dark event left a stain on the history of the school. According to legend, a janitor raped and murdered a girl in the gym locker room. Suspicion fell on the janitor after he failed to report to work the next day. Not long after, he returned to the school and took his own life. Since that time, female visitors have experienced very negative feelings in that area of the building, even if they have never heard the story. Up until the school closed in 1984, one educator in particular reported seeing and hearing the ghost of a young girl in her office. Others encountered a more hostile spirit—that of the murderous janitor. A psychic reportedly exorcised this negative presence.

Start a Free Blog at Webs.com